China will not compromise on core interests at Anchorage dialogue: ambassador 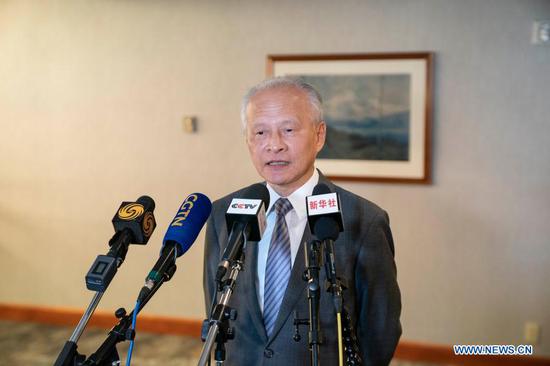 Chinese Ambassador to the United States Cui Tiankai said here Wednesday that China will not compromise on core interests during the upcoming high-level strategic dialogue between top diplomats of China and the United States.

"For any dialogue between countries, a basic prerequisite is that both sides should have the spirit of equality and mutual respect," Cui told Chinese reporters at a briefing, one day ahead of the dialogue that is scheduled for Thursday and Friday in Anchorage, a city in the U.S. state of Alaska.

"When its core interests are involved, China has no room to back down. This position will also be clearly articulated in the dialogue." Cui said, according to an English translation of the transcript released after the briefing.

If some people assume that China will say yes to any unilateral demands from any side just for some "outcomes" from the dialogue, they should give up, said Cui.

Cui also said that China does not expect that one dialogue can resolve all the issues between the two sides, adding that it does not have "unrealistic expectations or illusions" about the upcoming high-level dialogue with the United States.

The veteran diplomat said he hoped that the dialogue will become a beginning and that the two sides will start a candid, constructive, rational process of dialogue and communication.

"If this can be achieved, then the dialogue is successful," Cui said. "I hope that the two sides will come with good will and leave with better mutual understanding."

At the invitation of the U.S. side, Yang Jiechi, a member of the Political Bureau of the Communist Party of China (CPC) Central Committee and director of the Office of the Foreign Affairs Commission of the CPC Central Committee, and Chinese State Councilor and Foreign Minister Wang Yi will meet U.S. Secretary of State Antony Blinken and U.S. National Security Advisor Jake Sullivan at the upcoming high-level dialogue.

The dialogue is the first high-level contact between the two countries after their heads of state had a phone call on the eve of the Chinese lunar new year, and the first face-to-face meeting between the two sides since U.S. President Joe Biden took office in January.

Cui's remarks also came as the Biden administration repeatedly said that the United States will work with allies to engage China "from a position of strength."

"Some people may think that by talking to other countries before meeting with China, they can give out their voice and show their strength. This is unnecessary, and may not work," Cui said. "If you have issues to talk about with China, do it, face to face."

Cui noted that most countries, including some U.S. allies in Asia, actually have some doubts and concerns about U.S. policies.

These concerns are in the hearts of many countries in the world, including U.S. allies, but some countries just do not say it in public, Cui said. "It is hoped that the United States will understand other countries' concerns."