After 2-year excavation, remains of ancient capital revealed in Beijing 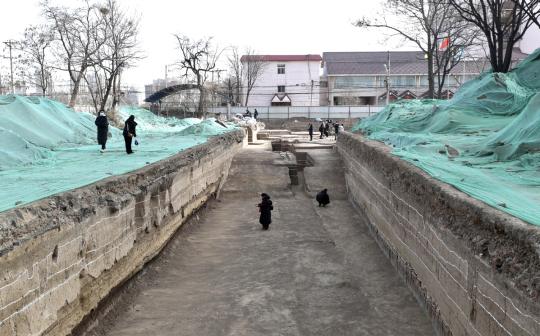 Zhongdu, the capital city of the Jin Dynasty (1115-1234) located beside what is now Beijing's Lize financial and business zone, was recently unveiled by archaeologists after two years of excavation.

Three parts of the ancient city wall, the Gaoloucun section in the west and the Wanquansi and Fenghuangzui sections in the south, were found preserved. A total of 2,500 square meters of the old capital city were discovered during excavation work by the Beijing Cultural Relics Institute. Remains of the ancient city were found during subway construction work in the capital's Fengtai district.

Beijing originally served as a key city for border defense or a provisional capital, before it became the center of the Jin Dynasty, historians said. "The discovery marks a turning point in the history involving the location and construction of China's capital city," said Ding Lina, a researcher in charge of the archaeological project.

Zhongdu served as Jin's capital for more than six decades during the dynasty's dominance, which lasted about 120 years until the Yuan Dynasty (1271-1368).

"The overlap between the ancient capital and the modern city has made the excavation hard as the southern part of the city wall was almost destroyed during road and landfill construction work," Ding said.

During the excavation, archaeologists also found protruding ramparts which were part of Zhongdu's defenses.

Each protruding rampart had three faces that allowed guards a wider view and improved the city's defenses, according to the researchers.

The excavation used various high-tech measures to detect, analyze and record the relics. They collected soil samples for further analysis of pollen spores to learn about the agricultural conditions of the period. Some animal specimens were also analyzed to study the environment and dietary patterns.

Archaeologists believe that Zhongdu was constructed based on Youzhou in the Tang Dynasty (618-907) and Nanjing during the Liao Dynasty (916-1125), but few relics have proved this theory. However, the discovery of tombs dating back to the Tang and Liao dynasties underneath the wall of Zhongdu provides direct evidence to back up this claim, Ding noted.

Detailed surveying and mapping as well as 3D laser scanners were used for the excavation work.