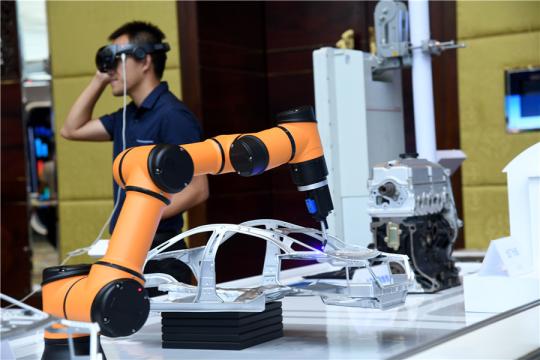 A visitor experiences an industrial internet system at the 2019 International Conference on Industrial Internet in Qingdao, Shandong province, on July 25. (Photo/Xinhua)

The comments came after China said it will make efforts to boost its industrial foundation, modernize the industrial chain, and stabilize the proportion of the manufacturing industry (in GDP), according to the outline of the 14th Five-Year Plan for national economic and social development and the long-range objectives through the year 2035.

Huang Qunhui, director of the Institute of Economics at the Chinese Academy of Social Sciences, said: "China's manufacturing industry is facing challenges as global industrial and supply chains are being reconstructed due to the COVID-19 pandemic and trade uncertainties."

The nation, for instance, has shortcomings in many crucial areas such as core components and key raw materials, which has in turn increased the emphasis on the real economy, especially the problems faced by the manufacturing industry, Huang said.

The outline said China will attach more importance to strengthening the foundation of the real economy and building the nation into a strong manufacturing power during the 14th Five-Year Plan period.

The plan came after the proportion of the manufacturing industry in China's GDP has gradually declined since 2015. Currently, manufacturing output accounts for about 27 percent of China's GDP, according to Huang from the Chinese Academy of Social Sciences.

Miao Wei, deputy director of the Economic Affairs Committee of the 13th National Committee of the Chinese People's Political Consultative Conference, recently said that a notable decline of manufacturing business in China's GDP will not only drag down the current economic growth and affect urban employment, but will also generate potential industrial safety hazards and weaken the country's anti-risk capabilities and international competitiveness.

In the four-tier structure of global manufacturing business, China is in the third echelon, and it will take at least three decades to achieve the goal of becoming a manufacturing powerhouse, said Miao, who is also a former minister of industry and information technology.

The outline highlighted China's goal to grow the contribution of strategic and emerging industries to GDP to more than 17 percent during the 14th Five-Year Plan period.

Such technologies are of high importance for China's future industrial upgrade, and there is a pressing need for the nation to establish a beachhead in these frontiers, Qiao said.

Yang Yuanqing, CEO and chairman of Lenovo Group Ltd, said more efforts are needed to accelerate the transformation of "Made in China "into "Intelligent Manufacturing in China" and enhance the quality and efficiency of industry.